Moments of My Own by Lindsey White

Moments of My Own by Lindsey White 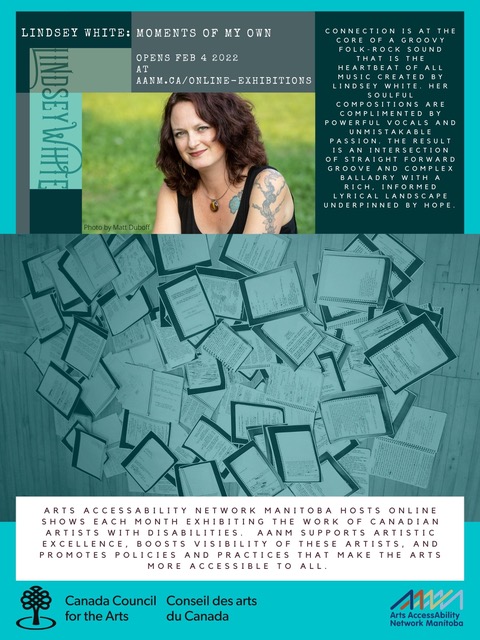 Connection is at the core of a groovy folk-rock sound that is the heartbeat of all music created by Lindsey White and her community. Her soulful compositions are complimented by earthy piano and guitar, powerful vocals and unmistakable passion. The result is an intersection of straight forward groove and complex balladry with a rich, informed lyrical landscape underpinned by hope. Her sound has been described as “the lovechild of Regina Spektor and Florence and The Machine”.

White established herself in the Winnipeg music scene early on as a passionate, expressive voice and an honest, thoughtful songwriter. She went on to create and facilitate community music programming that meets people of all ages where they are at. This work landed her a nomination for a Winnipeg Arts Council “Making a Mark” award, four “Women of Influence” Canadian Women Entrepreneur award nominations and a designation as one of the CBC Manitoba Future 40.

It is White’s insightful and forthright approach that results in a sense of trust and relatedness for listeners, co-creators and observers of her work. Whether on stage or in session, she is able to weave memories and learnings in a way that turns adversity into awareness while leaving all feeling more understood.

Moments of my Own

Words and music are not always combined to result in “songs”. Poetry and melody have a history of moving together to a variety of rhythms and with diverse outcomes. This work is a departure from my typical artistic practice and highlights connections between words and music in a new way. The three pieces are inspired by separate pivotal moments and connected by the similarity of their honest expression. Please be aware of the following trigger warnings: sexual assault, injury, death.

“Not a Mistake” is a poem supported by music that is also my “me too” (assault) story. I’ve considered the impact of sharing my experience with freezing during trauma, as it may have value for others who have encountered similar events. (Hopefully requiring fewer years of therapy to realize the normalcy of this response.) Links at the end of this video may connect others with resources and support, such as crisis counselling.

“She Didn’t Know” is an a cappella vocal song, written about a time when I lost my ability to safely play musical instruments, due to physical limitation. I wrote this in effort to forgive myself for ways I had unknowingly contributed to this period of increased disability. I have a genetic, connective tissue disorder called HEDS (Hypermobile Ehlers Danlos Syndrome) in addition to injuries resulting from several motor vehicle accidents. Difficulties surrounding the health of my spine have greatly affected my artistic practice, as well as every other area of my life. Others in the chronic illness community regularly struggle with self-blame after flare ups or re-injury. My hope is that their encountering of this piece may potentially serve to foster self-compassion outwardly, as it has for me on a personal level.

“6 Second Phone Call” is a meditation on a moment of transition and clarity. It could be about many such moments; we have all encountered unexpected and rapid change, however differently. This piece is less about repetition and more about becoming lost in a moment’s significance, clarifying the need for acceptance as it lands.

It was meaningful for me to work with my voice as a primary instrument throughout the composition of these pieces. Throughout my career, I have encouraged creative expression, shared from a place of honest vulnerability and experienced the power of raising our voices. By practicing a variety of expression vocally (with speaking, humming and singing) I was able to translate some of the challenges from these experiences into the language of the healed and healing.